HISTORY OF THE MODEL TRAM SHOP 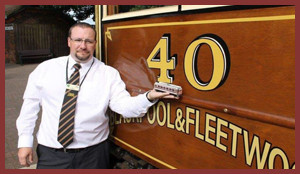 The Model Tram Shop began life over 20 years ago when Derek Lambelle started a small shop as a service to TLRS members who were having difficulty sourcing model trams and components. Gradually the business grew to encompass almost anything tram as the appetite for tramway modelling grew. In 2006 Derek decided that it was time to retire from the shop to concentrate on other projects so it passed to the then newly formed East Lancs Model Tramway Supplies. Many years on the future continues to look bright for the hobby. The shop still caters for modellers’ needs; stocking kits and other items from UK and international manufacturers too . From 2013 ELMTS began to manufacture resin kits under the ‘Kitchen Kits’ brand – an in joke as that is where the kits are cast. Kitchen Kits merged with Matt Summers Trams in 2017 to form Corporation Model Trams and take advantage of the latest computer aided design and 3D printing technology in producing a whole new generation of high quality detailed tram kits. This advance in technology and availability of more reliable items has meant that a full package of kits, motor units, overhead etc is available to allow all modellers – whether experienced and new to the hobby – to build and operate trams in miniature.

SO WHO ARE EAST LANCS MODEL TRAMWAY SUPPLIES?

East Lancs Model Tramway Supplies is run by John Whitehouse, a modeller of some 25 years and still learning. John was Commercial Manager for Heaton Park Tramway for a number of years, as well as Operations Manager and Events Manager. The fledgling volunteer operation of Blackpool Heritage Tram Tours prompted a move west and John was a volunteer Guard, Driver, Inspoctor and eventual Events Manager there until 2020. During the day John works as ABM in the Social housing sector of a well known builder’s Merchant with a blue logo. John is now enjoying a more domestic (though no less hectic/insane) life and concentrating on modelling and preparing layouts for exhibition.

ELMTS could not have endured all these years or indeed function without the help, advice and assistance of a great many people over the years (some sadly no longer with us). The main guilty culprits being: Marjorie Whitehouse, Alan Kirkman, Derek Lambelle, Bob & Joan Hill, Jeremy & Janet Valentine, Mike Jaimes, James Millington, Vernon Linden, Brian Robinson of Bec Kits, Len Squance, Blackpool Transport (and Blackpool Heritage Tram Tours) & Bryan Lindop (for their kind assistance and support with Blackpool projects). And of course all those modellers who have not only purchased but prompted and bullied us into doing things! And many, many more. And an extra special mention to Jim Halsall of Blackburn without whose encouragement John would never have continued modelling – and for being the very first customer of ELMTS!

So over time ELMTS has morphed into shop and manufacturer, firstly of the kitchen kits resin models and latterly into 3d models, printed both in house and abroad. This arm came about largely due to Matt Summers waving his early 3d prints in John’s direction and a wonderful friendship and partnership grew (now encompassing a huge range of 3d models) which spawned CMT. Eventually CMT came completely under the EMLTS banner with Matt happily taking the role of Chief designer!

So who does CMT now consist of?

So there you have it, The Model Tram Shop is made up of ELMTS & CMT. Confused? Yes we are too!